Here's a cool client video! Email me or use the form to request a tour date!

Tinian then and now

"There's more to discovering a destination than following a map!"
It would be a shame as well as a missed opportunity to come all the way across the world, to be so close, and not set foot on the soil of the island from which the Enola Gay took off on a mission that changed the world. Experience the stark contrast that exists between then and now (Tinian airfield was the busiest airfield during the entire war), and how this remote little piece of rock is fading in people's memories when it is of such critical significance to human history. You can do a half day 7:30am to 1pm and be back in time to see more of Saipan.

Should I do the Tinian tour on my own? It seems pretty straightforward.

If you contact me, I offer a Tinian Tour itemization for folks who might think it a bit pricey and who wish to do Tinian on their own. If you decide similarly, no problem! I'll provide all the tips I can for you to get the best experience. However, here's what I think the folks (perhaps you saw reviews on Tripadvisor?) may not be aware they missed by doing it on their own:(I just gave a tour of Tinian yesterday, and will be back again tomorrow.)
1. Typhoons (as well as occasional bush clearing and maintenance by the Tinian Mayor's Office) often reveal some sites and buildings that aren't on any maps and that require some detours through the bushes to access.
2. There are actually replicas of the atomic bombs (originally intended for public view until the idea was abandoned) that are situated on private property (again, not on any maps) and many local residents and even Visitor Authority folks aren't aware of them.
3. The Tinian map alone won't reveal any local lore, any recent or distant history that the history books don't cover or got wrong, and won't have you run into local residents who can share their anecdotes about life on Tinian then and now, nor will the map include the insights gained from having given tours (as I did just yesterday), to a fellow whose uncle was actually in FIVE invasion landings (Guadalcanal, Tarawa, Saipan, Tinian and Okinawa).
So, again, this is not a hard sell, but simply a reminder that you do sacrifice a little something extra without a guide. :-) You can take your time to decide on the Tinian aspect (and I'll happily support any decision you make), while we arrange your Saipan tour.
Meanwhile, here is an amazing 1945 black&white film (discovered via blog.nuclearsecrecy.com) that shows the preparation of the atomic bomb on the same field you'll be able to visit while on Tinian:
If not visit, watch Little Boy and Fat Man on Tinian on Youtube
Runway Able, on Tinian, is the runway from which the Enola Gay took off on its flight to bomb Hiroshima. Almost 70 years later, that runway is still accessible to the public.
If not visible, view Runway Able on Tinian on Youtube. filmed by tour customer, George M. 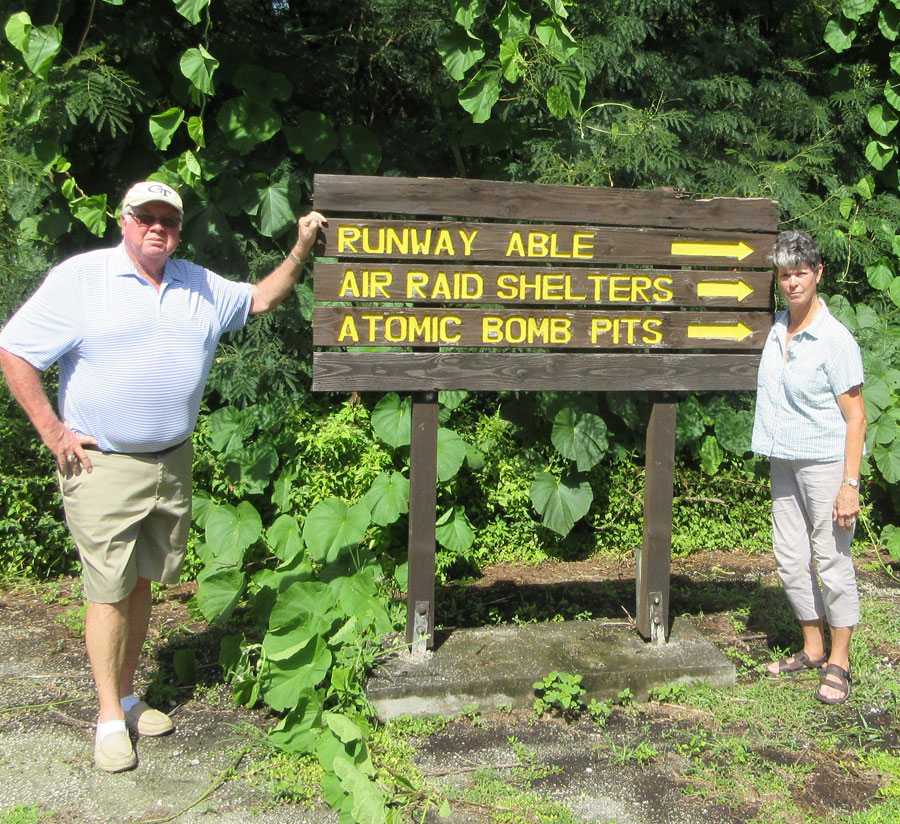 Approaching the bomb pits on Tinian 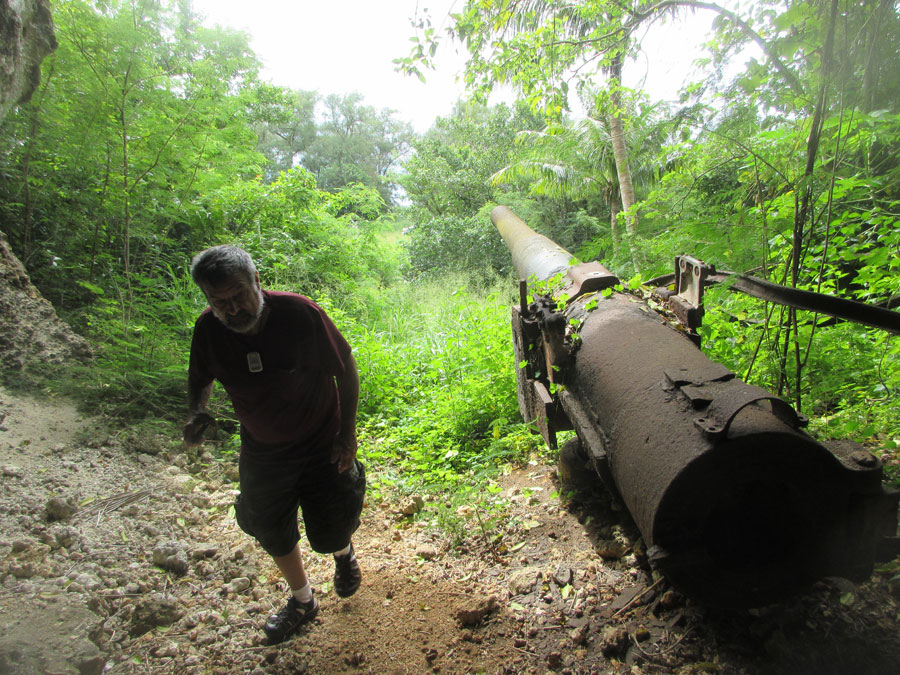 Hidden cannon in a cave on Tinian 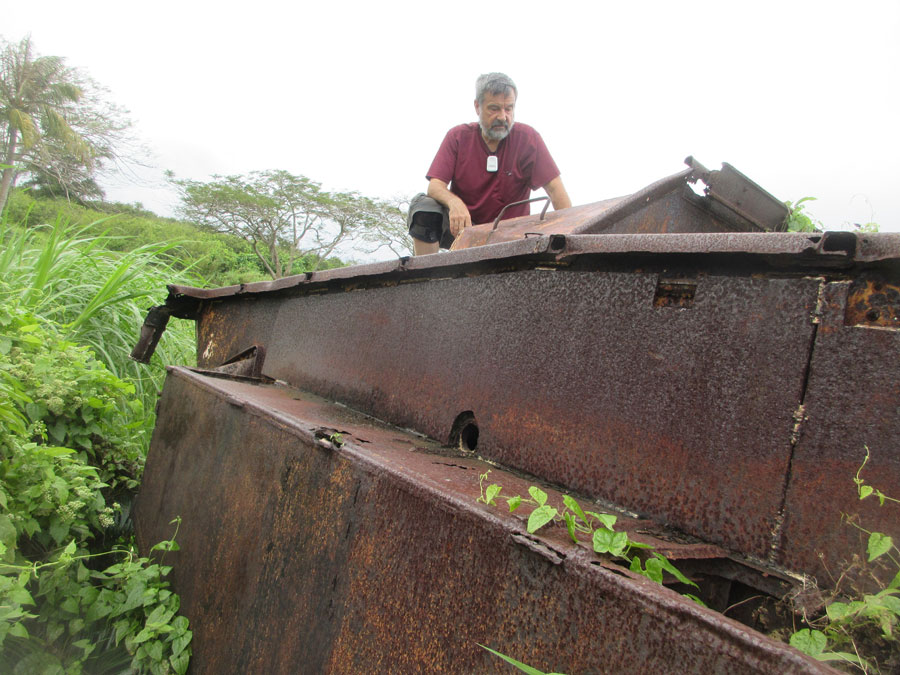 House of Taga on Tinian

Al and Reginald took the WWII tour on Saipan, then visited Tinian on their own 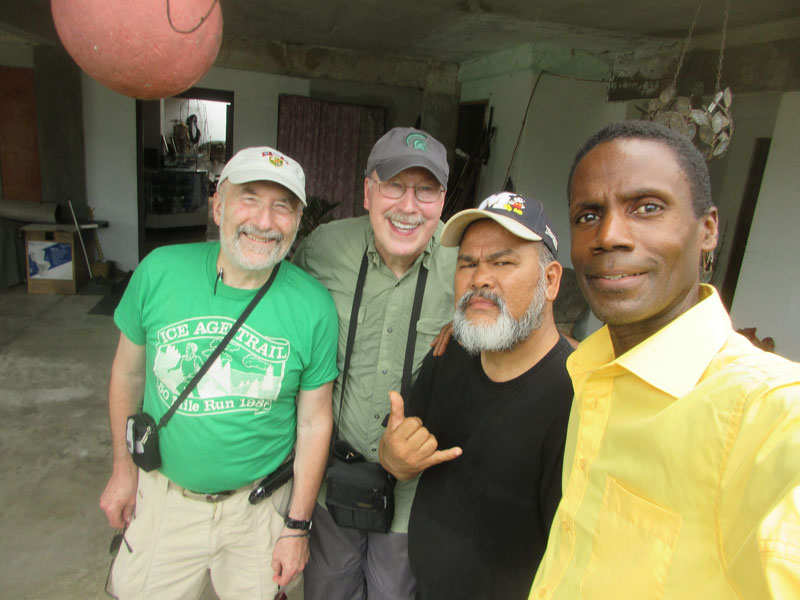 Al, Reg, Fabian the relic hunter and Walt on Saipan
I’ve been to Japan over a half-dozen times over the past decade. Recently, I learned how easy it is to visit Guam via Tokyo’s Narita airport. For this year’s Japan trip, I decided to do just that and visit Saipan and Tinian as well. The overriding reason was to visit the latter two islands as my uncle participated in their invasion by U.S. forces (his unit was the 534th Amphibian Tractor Battalion) during WWII. He lived a long and full life, but like many vets, he did not discuss his service. So, this visit was very personal. I am so happy that I learned of Walt and DiscoverSaipan.com, and with a friend booked Walt’s personalized tour. Although the tour had a WWII site focus, Walt ensured we also visited other sites that helped us also better understand Saipan, its history, and its citizens and their culture. This comprehensive tour let us take many photos, which will be much easier to caption, remember, describe to friends due to Walt’s meticulously timestamped post-tour itinerary. He even sketched an itinerary for our next-day’s visit to Tinian. Walt was open to all questions, and he even now continues to provide us more information and amplification via his post-tour research updates. Having Walt as a tour guide was like having another close friend in the tour group to share the experiences. Walt and Discover Saipan provide an excellent personalized tour of Saipan that my friend and I thoroughly enjoyed and learned much. Because of Walt and his focus on a personalized tour experience, I felt my personal mission was fulfilled and that I made a new friend. I highly recommend Walt and DiscoverSaipan.com! (April 2017)

Hasse at the House of Taga, the ancient latte stone site on Tinian © CTB Global / Chris Travel Blog
• Article about Hasse in the Saipan Tribune • Read the ChrisTravelBlog review of Tinian